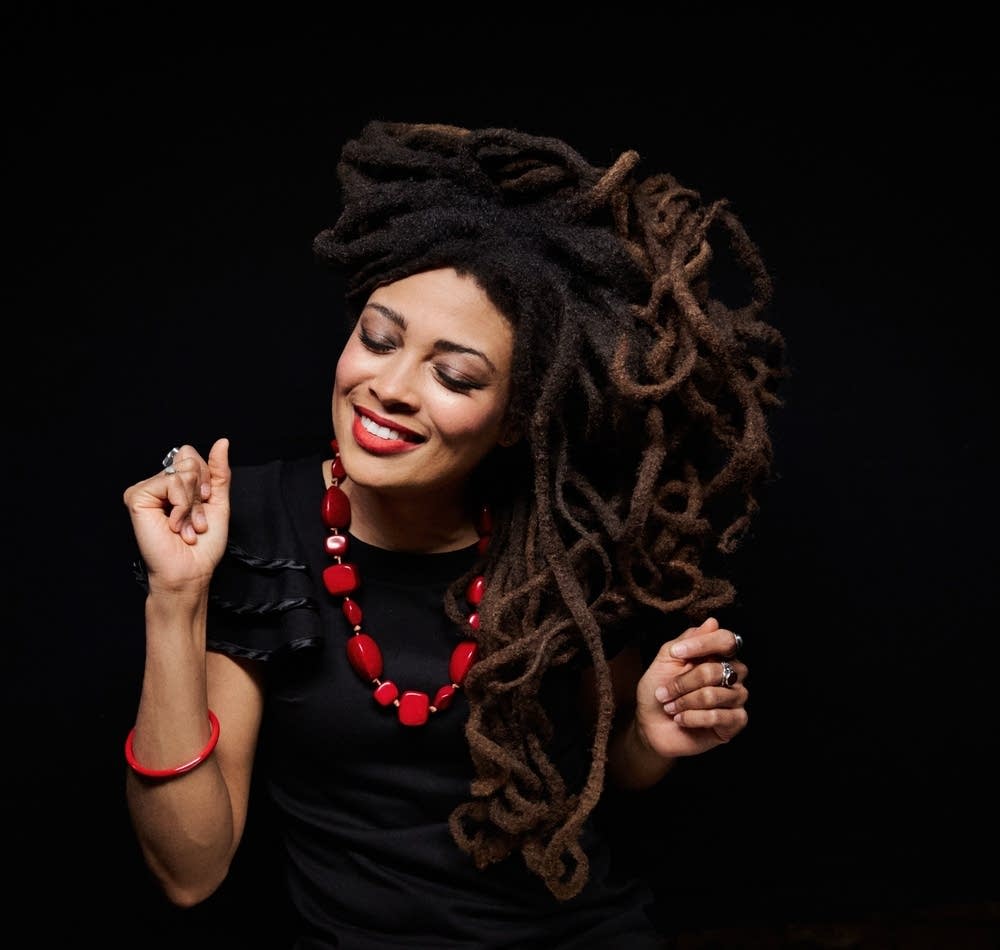 Since the release of her 2013 breakout Pushin’ Against A Stone, June has been patiently at work in the garden of song, nurturing seedlings with love and care into the lush bloom that is her stunning new album, The Order Of Time. Some songs grew from seeds planted more than a decade ago, others blossomed overnight when she least expected them to, but every track bears the influence of time. See, time has been on June’s mind a lot lately. It’s the only constant in life, even though it’s constantly changing. It’s the healer of all wounds, the killer of all men. It’s at once infinite and finite, ever flowing with twists and turns and brutal, churning rapids that give way to serene stretches of placid tranquility. Fight against the current and it will knock you flat on your ass. Learn to read it, to speak its language, and it will carry you exactly where you’re meant to be.

“Time is the ruler of Earth’s rhythm,” June explains. “Our daily lives revolve around it. Our hearts beat along to its song. If we let it, it can be a powerful guide to turning our greatest hopes and dreams into realities.”

June knows a thing or two about turning hopes and dreams into realities. With Pushin’ Against A Stone, she went from self-releasing her music as Tennessee’s best kept secret to being hailed by the New York Times as one of America’s “most intriguing, fully formed new talents.” The New Yorker was captivated by her “unique, stunning voice,” while Rolling Stone dubbed her “unstoppable,” and NPR called her “an elemental talent born with the ability to rearrange the clouds themselves.” She astonished TV audiences from coast-to-coast with spellbinding performances on The Tonight Show, The Late Show, Austin City Limits, Rachael Ray, and CBS Saturday Morning, and graced some of the world’s most prestigious stages, from Carnegie Hall to the Kennedy Center. First Lady Michelle Obama invited June to The White House, and she toured with artists like Sharon Jones & The Dap Kings, Sturgill Simpson, Norah Jones, and Jake Bugg in addition to flooring festival crowds at Bonnaroo, Outside Lands, Newport Folk, Hangout, ACL, Pickathon, Mountain Jam and more. In the UK, the reaction was similarly ecstatic. June performed on Later…with Jools Holland, joined a bill with the Rolling Stones in Hyde Park, and took the press by storm. Uncut praised her “remarkably careworn vocals,” MOJO swooned for her “glorious sound,” and The Independent’s Andy Gill wrote, “June has the most strikingly individual delivery I’ve heard in ages.”

When it came time to record the follow-up, June felt liberated by the success, fearless and more confident than ever in trusting her instincts and following her muse. There was to be no rushing the music, no harvesting a song before it was ripe on the vine and ready to be plucked. When she sensed the time was right, she headed to rural Guilford, Vermont, with producer Matt Marinelli, spending long stretches through the fall and winter living and recording away from the hustle and bustle of her adopted home of Brooklyn.

“They made us feel so welcome in Vermont,” remembers June. “I was cooking amazing food and hanging out with the band all the time. There were long talks and long walks in the snow, and friends would come up for holidays. I felt like I put myself in a place where I could really soar. With the last album, I was absorbing and learning and developing so much in the studio, but this is me taking the things I learned and the things I felt in my heart and fighting for them.”

In her heart, June is a songwriter first and foremost, willing and able to blur the lines between genres and eras of sounds. The result is an eclectic blend of folk and soul and country and R&B and blues that is undoubtedly the finest work of her career. Opener “Long Lonely Road” settles in like languid southern heat, as June looks back to the sacrifices of her parents and grandparents, singing in a gentle near-whisper of the sometimes difficult, sometimes beautiful journey we all must undertake in search of brighter days. On the soulful “Love You Once Made,” her voice is backed by rich horns and vintage organ as she makes peace with the specter of loss and the ephemeral nature of our relationships, while the bluesy juke joint rocker “Shake Down” features backup vocals from her brothers, Jason and Patrick Hockett and father, Emerson Hockett recorded at home in Tennessee, and “Man Done Wrong” centers on a hypnotic banjo riff that’s more African than Appalachian.

“People shouldn’t necessarily think of bluegrass when they see the banjo,” explains June. “It was originally an African instrument, and people in America used to play all kinds of banjo: mandolin banjo, ukulele banjo, bass banjo, classical banjo, jazz banjo, there were even banjo orchestras. For some reason people like to limit it and say it just has to be in folk and bluegrass, but to me it can be in anything, and I really wanted to set the banjo free on this record.”

The banjo turns up again later as the underpinning of the R&B rave-up “Got Soul,” which plays out like a mission statement for the entire album, as June offers to “sing a country tune” or “play the blues” but reveals that underneath it all is her sweet soul. Those genre terms might be simplistic ways to attempt to define her, empty signifiers creating distinctions between sounds where June sees none. “With You” channels the sprightly, ethereal beauty of Nico with fingerpicked electric guitar and cinematic strings, “Slip Slide On By” grooves with shades of Van Morrison, and “If And” slowly builds over meditative hum that hints at John Cale.

Despite the music’s varied nature, the songs all belong to a cohesive family, in part because they’re tied together by June’s one-of-a-kind voice, and because they’re all pieces of a larger rumination on the passage of time and how it affects us. The ultimate takeaway from tracks like “The Front Door” and “Just In Time” is that the present is all we have. Everything around us (our loved ones, our youth, our beauty) will someday fade and disappear, but that transience is what makes those things all the more magical. We’re given this brief moment to share our love and light with the world, and when, as June sings on the album, “Time’s hands turn and point straight towards you,” you’d better be ready.

Thankfully for us, June was ready when time told her to harvest these songs. In the garden, as in life, there is a time for everything and the moment has finally arrived to enjoy the fruits of all her labor. With ‘The Order Of Time,’ Valerie June has prepared a bountiful feast, and there’s a seat at the table for everyone.

Ireland’s award-winning, double-platinum selling artist Mick Flannery releases his self-titled sixth full-length worldwide on August 30th, 2019. Out now in Ireland, and going straight to number one in his home country's official album charts, it’s Flannery’s third chart-topper (following 2012’s Red to Blue and 2014’s By The Rule) A cliché has it that you have to beware of the quiet ones because most of the time their voices speak sharper and with more range than the loudmouths. Every cliché, however, has a grain of truth in it, and so it’s fair to say that while County Cork singer-songwriter Mick Flannery is outwardly reserved, his songs are fluent in expressing layered aspects of the human condition; its flaws, triumphs, and general uncertainty. Recorded partly in Ireland with Christian Best and partly in Los Angeles with Australian producer Tony Buchen, the new album features Flannery's trademark hushed musings, big walls of sound, and sharp, insightful and thought-provoking lyrics. Mick Flannery is on the brink of releasing not only his new album worldwide but also overseeing the worldwide premiere of the stage musical, Evening Train (so named after his 2007 debut album). He began to write songs as a teenager in his home of Blarney, County Cork. As musical influences from albums by the likes of Bob Dylan, Van Morrison, Joni Mitchell, and Tom Waits seeped into his creative DNA, Mick absorbed, learned and honed the craft that would send him on his way into the world. The path was smoothed somewhat when, at the age of 19, he became the first Irish songwriter to win the Nashville-based International Songwriting Competition. By the time he turned 21, he had signed to a label and released his debut album. Mick Flannery’s self-titled album is set for release worldwide on Friday 30th August 2019.